Lithochimeia was retained to investigate current and historic saltwater releases on a large ranch in northeast OK .

In all, over 2 million square meters (540 acres) of surface area was surveyed using the EM-31-MK2 ground conductivity meter.  This was accomplished in in less than four weeks because of the ability to rapidly acquire data this geophysical method provides.

Characterization of contamination this widespread through air-photo analysis, on-ground visual inspection and direct sampling alone would require collecting hundreds of samples and would be very expensive. When applicable, modern geophysical methods provide cost-effective and time-efficient solutions for projects requiring both large amounts of information while maintaining high data density. 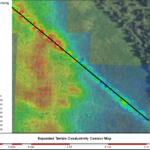