Lithochimeia was retained to investigate high salinity liquids that had pooled on the surface of a private landowner’s property in Hughes County, Oklahoma.  Lithochimeia was tasked to characterize the extent of contamination and identify the potential source.

Client interviews revealed that a large diameter plastic pipe had been recently installed to transport frac water and flowback water. Over a portion of the property, this line was located adjacent to a steel line carrying natural gas.

A Terrain Conductivity Survey was planned and executed using Geonics EM-31-MK2 over the impacted area as well as the surrounding surface.  Electromagnetic (EM) Surveys use the principle of electromagnetic induction to measure the conductivity of the subsurface based on soil properties and chemistry of pore fluids.  EM Surveys do not require ground contact and therefore allow rapid data acquisition.   Data can be processed and viewed in near real time.

The data obtained was processed in the field, and the resulting contoured map of terrain conductivity showed that the EM Survey clearly imaged the location of the steel gas line and the area of elevated conductivity associated with the pooled saltwater.

The expanded EM-31 Survey produced a contoured terrain conductivity map that displayed a large plume of conductive material in the subsurface apparently emanating from the vicinity of the pipeline northwest of the original survey focus.  The data suggested a breach of the plastic line that had been undetected until the EM-31 Survey was conducted and processed.

Relying exclusively on soil sampling and visual observation would not have been able to detect this subsurface plume of conductive fluids.  The high data density and efficiency of the EM-31 Terrain Conductivity Survey allowed for a larger area to be rapidly characterized.  Early detection of salt contamination will reduce injury to soil and ground water and reduce remedial costs for the responsible party. 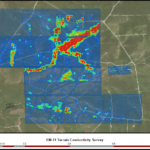