In November 2002, Meridian Aggregates Co., a wholly owned subsidiary of Martin Marietta Materials Inc., applied for a permit to withdraw groundwater from the Arbuckle-Simpson in south-central Oklahoma at a rate of 1,400 acre-feet/yr for dust suppression and crushed stone washing at the company’s aggregate mining operations in Johnston County, Oklahoma. A local grassroots organization, Citizens to Protect the Arbuckle-Simpson Aquifer (CPASA), which arose when local citizens acted in response to man-made threats to the Arbuckle Simpson aquifer and the springs and streams which flow from it, opposed this permit application.

Although Arbuckle-Simpson aquifer, a sole-source bedrock aquifer which lies beneath a surface area of about 500 square miles in south-central Oklahoma, contains a vast amount of high quality groundwater, its rate of recharge is low (less than one-acre foot/yr). Consequently, CPASA was and remains concerned that water withdrawal from the aquifer in excess of recharge could threaten municipal water supplies, more than 100 springs and streams whose flow depends solely on the flow of groundwater. Loss of the groundwater resource for these uses would adversely impact numerous commercial, recreational, municipal and federal facilities rely on the waterways fed by spring flows of the Arbuckle Simpson aquifer.

Lithochimeia worked on behalf of CPASA to review and analyze data as well as numerous technical studies regarding the hydrogeology and geology of the Arbuckle-Simpson aquifer. Lithochimeia developed a geological interpretation regarding the hydro-geologic behavior of that portion of the Arbuckle-Simpson aquifer that would be impacted by Meridian Aggregates’ proposed groundwater well and quarrying operation that indicated potential for adverse impact to local springs at the proposed groundwater withdrawal rate. Lithochimeia’s work included a geologic inspection of the quarry under development and the area surrounding the quarry. Lithochimeia provided an written expert opinion, deposition testimony and live testimony at an Oklahoma Water Resources Board (OWRB) administrative law hearing.

In mid-2006, and after a lengthy administrative law process, the OWRB granted Meridian a permit to withdraw 274 acre-feet/yr, or approximately 20% of the 1,400 acre-ft/year in Meridian Aggregates’ original permit application. 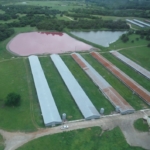